In a rare occurrence, MacQueens bustard or Houbara bustard has been spotted in Nal Sarovar Bird Sanctuary (NSBS) near Ahmedabad in two consecutive months and bird watchers claim they sighted two different birds.

The development comes in a year when red-breasted goose and marbled teal, two international migratory species entered the official records of Nal Sarovar, a shallow-water natural lake which has been designated as a wetland of international importance by the Ramsar Convention. 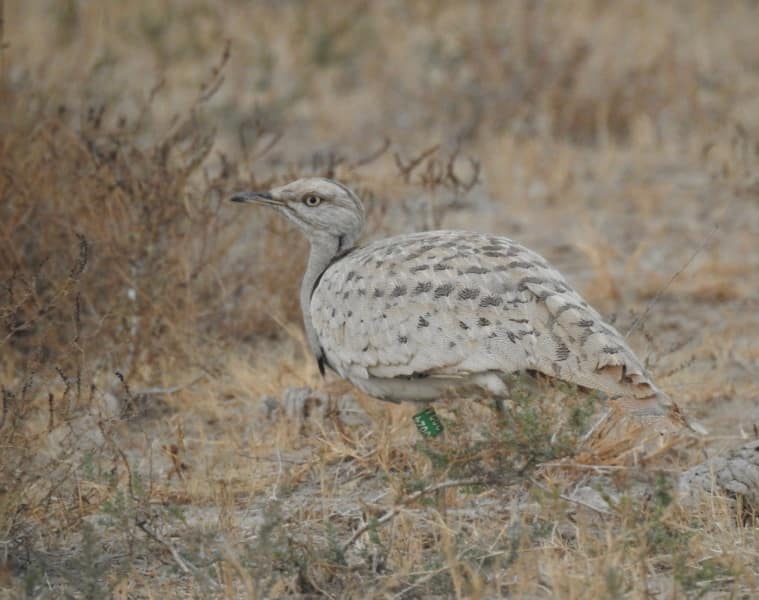 Akbar and his friends could photograph the bustard which had, on its left leg, a ring bearing number 3824. (Photo by Akbar Avlani)

Akbar Avlani, a local birdwatcher and tourist guide from Vekariya village on the edge of Nal Sarovar first sighted a Houbara bustard in western part of the wetland in the second week of November. He and his friends Abdul Multani, Anwar Sama and Kamruddin Alvani sighted one more bustard in the south-eastern part of the sanctuary on December 15.

“We were out to install bird perches given by the forest department in the sanctuary when I sighted an unusual bird and on closer examination, it turned out to be a Houbara bustard,” 32-year-old Akbar who has been birdwatching for the past 15 years said, adding, “The bird was foraging in a dried area of the wetland having dried vegetation.”

Akbar and his friends could photograph the bustard which had, on its left leg, a ring bearing number 3824.

“The bustard which we saw in November this year wasn’t a ringed bird whereas the one we saw on December 15 had a ring on its leg. Therefore, it appears that the two birds were different individuals,” Akbar further said, adding the birds were not seen on subsequent days.

He said, “Bustard sightings are rare in Nal Sarovar as the sanctuary is a wetland while the bustards are birds of grasslands.” BCSG is an organisation of ornithologists and birdwatchers of Gujarat and publishes journal called Flamingo.

Houbara bustards are believed to be migrating from their breeding grounds in the Middle East to the Indian sub-continent during winters. In Gujarat, they are sighted in the Little Rann of Kutch (LRK) in Surendranagar district as well as in Kutch. In fact Kutch is the only place in Gujarat where the Great Indian bustard, the lesser florican and Houbara bustards are found together.

“But sighting of Houbara bustard in Nal Sarovar is not entirely surprising since geographically, Nal Sarovar can be called an extension of the Little Rann of Kutch where we find birds of this species in good number during winter,” Trivedi, who has been birdwatching in Nal Sarovar and other parts of the states for decades, said.

Dipak Chaudhary, incharge assistant conservator of forests (ACF) of NSBS, too said that bustards are rare in Nal Sarovar.

“However, this year, the water level in the wetland is comparatively law and therefore there are patches within the sanctuary which are suitable for grassland birds,” Chaudhary said, adding, “It is also possible that the bird could have made only a brief stopover in Nal Sarovar as it was not sighted by our staff in subsequent days.”