Family planning in India seems to be a woman’s responsibility as female sterilisation remains the most popular contraceptive method among married couples, data analysed by CNN-News18 shows.

According to the National Family Health Survey-5 (NFHS) (2019-21), about 67% married couples in India are using at least one contraceptive method – it stands at 69.3% in urban areas while 65.6% for rural areas.

The current numbers are an improvement from 2015-16, when the contraceptive prevalence rate among married women was just 54%.

“Among currently married women aged 15-49, 38% use female sterilization, followed by male condoms (10%) and pills (5%). Ten per cent use a traditional method, mostly the rhythm method,” the NFHS-5 reads.

The numbers also show that out of those who opted for female sterilisation, only 58.7% were informed about the side effects or problems, while just 50.8% were told what they can do if they experienced any side effects. The report also shows that 65% of women were informed by a health or family planning worker about other methods that could be used. 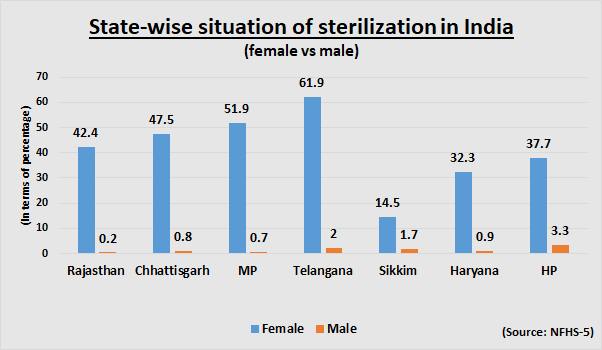 Contraceptive methods are used to limit or space the number of children couples have. The report also suggested that the knowledge of contraceptive methods is almost universal in India, with more than 99% of married women and men knowing at least one method of contraception. It says that about 75% of women have heard or seen a family planning message in the past few months. Exposure to family planning messages is slightly higher for men at 78%. 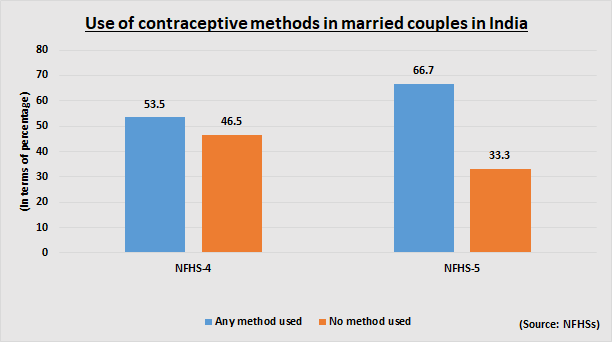 The report shows that about 33% of married couples are not using any method. This is also an improvement from the last NFHS as about 47% couples were not using any contraceptive method during the 2015-16 survey. 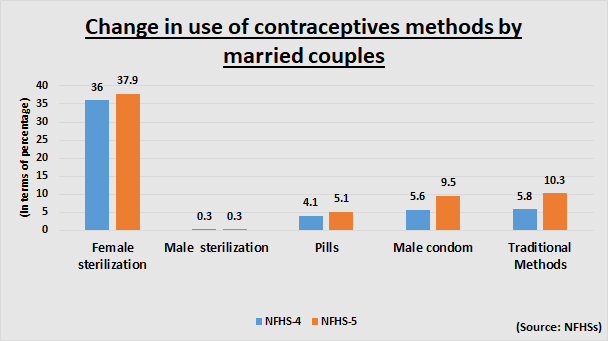 In Punjab, over 77% of men believe that contraception is women’s business — highest in the country. Chandigarh stood second with 69% men having similar beliefs.

The numbers further show that men across the background have similar beliefs – be it age groups, schooling levels, religion or wealth quintile, with certain exceptions. Among exceptions are young men — just 30% of men between 15 and 19 years have this opinion. The highest variation can be seen when men are divided in terms of religions — about 65% Sikh men feel that contraception is women’s business, while when it comes to Jains, the share is just 17.4% and in Buddhists, it is 21%. 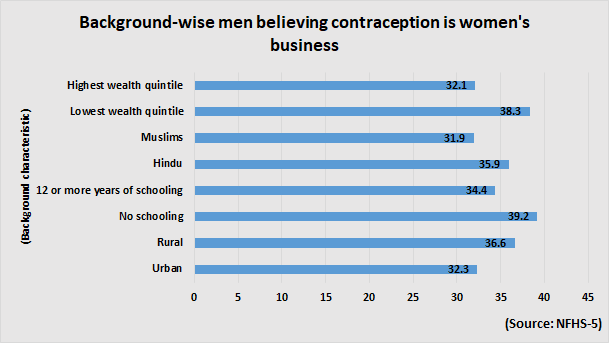 Punjab (44%) and Chandigarh (41%) are the top regions where most men feel that women who use contraception may become promiscuous.

A Different Trend in Unmarried Couples

STATE-WISE USE OF CONTRACEPTIVE METHODS

Read all the Latest News India and Breaking News here

There Should Be No Space for Fraud in AB-PMJAY: Mandaviya

Jaish Terrorist Killed in Encounter in Jammu and Kashmir’s Kulgam

Traffic Movement Likely to Be Affected in Several Areas of Delhi

J-K Congress, AAP Demand Hassle-free Movement of Fruit-laden Trucks from Kashmir to Outside Markets on Priority

Tharoor Claims He Has Support of Nehru Family, Majority of Party Workers

Dependence on Russian Defence Equipment Not Lack of Trying on India’s Part: Jaishankar

Citing release of Perarivalan, Nalini says let me out too; SC...

There Should Be No Space for Fraud in AB-PMJAY: Mandaviya